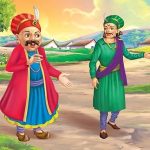 Several stories about the famous Mughal emperor, Akbar, and his advisor, Birbal, have done the rounds for many years. It was mostly passed on from generation to generation by word of mouth. Many villagers even created new stories with morals and assigned the characters of Akbar and Birbal if they deemed fit. Kids delight in listening to the interesting, and sometimes funny, occurrences in the lives of Akbar and Birbal, and hence make for

Here are seven of the most famous Akbar–Birbal stories you can read to your kids at bedtime.

1. The farmer who bought a well

Not knowing what to do, the farmer went to the king’s court and told Akbar about his predisposition. Akbar handed over the case to Birbal.

The rich man realised his ploy was not going to work and let the farmer use the well from the water.

Moral: Do not try to deceive people as you will end up paying the price.